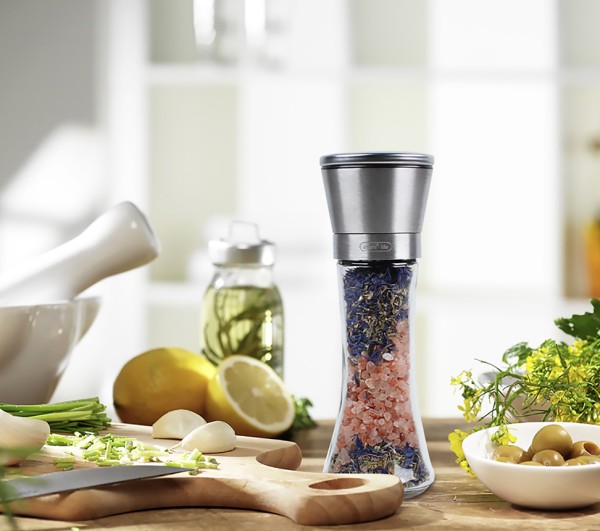 Health starts in the mouth!

Himalaya Salt - The Salt of Kings

Himalayan salt is the purest form of salt in the world and is often referred to as "white gold". Himalayan salt has existed on earth for more than 250 million years and contains a blend of natural ingredients that are identical to the elements of the human body. Furthermore, Himalayan salt has a high bio-energetic quality.

Himalayan salt contains all the minerals that are important for the human body, is free of harmful substances, consits of a large number of halites an is an excellent alternative to conventional table salt. To preserve the purity of this salt, the Himalayan salt is collected in the mountains by hand, broken with stones and packed in organic cotton bags.

Our emmi®-lifeSalt Mix (Himalaya Salt, Tuz Gölü Salt and Lavender) is ideal for use in your home kitchen. Even small quantities give the dishes a typical Mediterranean taste that hardly needs any further spices. Seafood, grilled poultry and lamb but also dips sauces benefit from the pleasant aromas of the south.

Today it is used by many top and gourmet chefs and is a standart ingredient in a range of natural health and beauty treatments, saunas and steam baths.

In winter it is ice blue, in summer sometimes snow white... The Tuz Gölü is one of the most salty lakes in the world with 32,9 % salt content. Located in the dry highlands between Ankara, Konya and Aksaray. The salt lake has no discharge and is fed only by precipitation, about 250mm a year, and the groundwater. In the summer months a crystalline layer of salt is formed. Depending on the angle of the incident light, the surface of the lake can take on different colours.

In winter, the water depth of the lake increases by 60 to 80 cm, which dissolves the salt in the deeper layers and makes the water rich in sodium and chloride. During the summer months, the water evaporates and a salt layer about 12 cm thick with a sodium chloride content of about 98% remains. The calcium content is about 0.34%, the magnesium conte nt about 0.05%. Every year, a new layer of salt is formed, which is mined from August onwards.

Lavender with its intense scent not only keeps the linnen cupboard free of moths, but is also good for your diet. In addition to its smell and taste, lavender also has a healin effect, which was already appreciated by the Roman legionnaires. Lavender was discovered as an ingredient in the early Middle Ages and is still frequently used in the Mediterranean cuisine today.

Lavender salt is a flavoured spice or herbal salt consisting of natural salt and lavender blossoms. Lavender is mainly found in Mediterranean and southern french kitchen. Lavender salt gives dishes a typical provencal taste and aroma.
Order now our high-quality emmi®-life Salt Mix in the modern and noble salt mill and treat your palate to a short holiday in the southern sun.


Store the salt in a dark and dry place and enjoy the unique aroma for a long time.

Trusted Shops Reviews Toolkit: 1.1.1
Subscribe & get € 5 voucher!
sucbscribe now
Subscribe to our newsletter now and take advantage of exclusive benefits!
The newsletter unsubscription is possible at any time!
€5
Newsletter
This website uses cookies to ensure you get the best experience on our website.
Accept