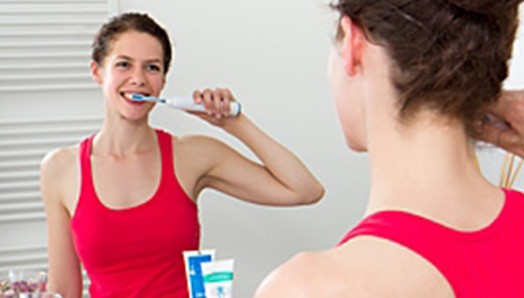 Daily brushing is the most important part of oral hygiene. For many people, however, it appears as an annoying evil. The regular dental care with toothbrush and toothpaste is the most effective way to prevent diseases of teeth and periodontium. The emmi®-dent is now the first toothbrush available on the market that works with 100% ultrasound. With the emmi®-dent, you can now also benefit from the advanced technology in daily dental care at home. Anyone who cleans their teeth several times a day with the emmi®-dent ultrasonic toothbrush will care for their teeth particularly gently and sustainably. Thanks to the ultrasound technology, not only the tooth surfaces but also the interdental spaces, the periodontal pockets and fissures can be thoroughly cleaned. In this way, oral hygiene with ultrasound helps to effectively prevent potential diseases such as tooth decay and periodontal disease. At the same time, the emmi®-dent is characterized by its easy handling and thus contributes to making your daily brushing easier. Thanks to the emmi®-dent, teeth cleaning can be done with ease. Learn how the ultrasound-based toothbrush works, works and simplifies oral hygiene.

The importance of oral hygiene

After meals, food remains on and between the teeth. If they are not thoroughly removed, bacteria will settle there and plaque will form, also known as dental plaque. A process that is particularly favored by sugary food. Plaque shows as a whitish-yellow biofilm on the teeth, which also can be felt with the tongue. The teeth feel rough and uneven. The only remedy to remove these discolorations is thorough oral hygiene with a toothbrush and toothpaste. Otherwise, the bacteria that are in the plaque produce malodorous compounds and can cause bad breath. In addition, the bacteria attack the enamel and nest there - caries is created. In addition, the plaque can harden to tartar within a few days due to the interaction with components of the saliva. The result is gingivitis and periodontitis, which can lead to tooth loss. Once tartar has formed, it can only be removed by the dentist.

The best prophylaxis against dental plaque and tartar and thus against the resulting diseases is the regular and conscientious oral hygiene - which is particularly easy and thorough with the emmi®-dent. The difference between tooth cleaning with the ultrasonic toothbrush and conventional brushes will be felt after the first application. When you run your tongue over your teeth, they feel noticeably smoother and cleaner as both plaque and other stubborn contaminants have been removed almost completely. The ultrasonic toothbrush cleans the teeth and interdental spaces not only very thoroughly, but also completely without muscle power and exerts no pressure on the tooth enamel, as it may be the case when cleaning with a conventional manual toothbrush or electric toothbrush.

Principle of ultrasound during tooth cleaning

The principle of action of the emmi®-dent is very simple: the ultrasonic toothbrush uses a new micro-cleaning method with pure ultrasound, which generates up to 96 million oscillations per minute. The ultrasound releases millions of micro-bubbles, which are easy to get into the smallest gaps and cavities. Here, the bubbles dissolve existing dirt particles from the gaps and from the tooth surfaces. Cleaning teeth with ultrasound is thus particularly effective. In addition, the oral hygiene is done in a completely harmless way, as well as our specially developed tooth creams harmonize perfectly with teeth and gums.

Easy handling of the emmi®-dent

The emmi®-dent not only plays its benefits in the cleaning of the teeth, but is also characterized by a particularly simple handling. Their application does not require brushing anymore because the toothbrush works exclusively on the basis of 100% ultrasound. It is sufficient to only brush the brush slightly over the teeth during daily oral hygiene. This type of application is already sufficient to remove most of the dirt particles that are on both the teeth and in the interdental spaces. Unlike traditional manual toothbrushes, the emmi®-dent also prevents abrasion of tooth enamel due to abrasive particles. Irritations on the gums, which were otherwise often triggered by mechanical cleansing movements, are a thing of the past in oral hygiene with ultrasound. Instead, the emmi®-dent ultrasonic toothbrush maintains the teeth with a pleasant micro-massage, which also stimulates the circulation of the oral mucosa. Thus, the teeth cleaning supports the body's own healing processes and has a positive effect on the flora in the mouth.

Through their ease of use and particularly thorough cleaning, our ultrasonic brushes help you with oral hygiene in the morning and evening - and also make a valuable contribution to long-term prevention and prophylaxis. Thanks to the antibacterial effect of ultrasound, you can remove plaque in a particularly simple and gentle way. As a result, the emmi®-dent ultrasonic toothbrush consistently counteracts the development of dental plaque and calculus, which can cause lasting damage to the teeth in the form of tooth decay and periodontitis. Even tedious symptoms such as bad breath and discoloration of the teeth can hardly arise in oral hygiene with ultrasound.

Oral hygiene such as professional teeth cleaning at the dentist

By using the emmi®-dent, your teeth can also be visibly brightened. For even deposits caused by tea, coffee, wine or nicotine, which have already formed on your teeth, can remove the ultrasonic toothbrush. For this reason, always use emmi®-dent ultrasonic brushes for dental care, so that you will not be bothered with any dental problems in the future and feel the daily oral hygiene, as if you have just had a professional tooth cleaning with the dentist - a good feeling!

Trusted Shops Reviews Toolkit: 1.1.4
Subscribe & get € 5 voucher!
sucbscribe now
Subscribe to our newsletter now and take advantage of exclusive benefits!
The newsletter unsubscription is possible at any time!
€5
Newsletter
This website uses cookies to ensure you get the best experience on our website.
Accept